Katie, Jenn and Tami at Macheme Gate before the climb
When Tami first arrived in Kenya, she confessed something to me while unpacking her amazing mountain climbing gear for Mt. Kilimanjaro. “So, I’m really not that out-doorsy.” At first I thought she was kidding but when she convinced me that she wasn’t, my jaw fell open. Not out-doorsy? This girl had half of REI in that black duffle bag of hers, how could she not be out-doorsy? “Most of this stuff is borrowed,” Tami explained, “the backpack, the sleeping bag, the rain pants, the rain jacket, the gaiters…” While Tami may not be out-doorsy herself, she has a lot of generous friends who are. I nervously considered my now pathetic looking pile of Kilimanjaro gear, some dating all the back from the Clearwater Camp for Girls days of my youth, and the only borrowed item, a sleeping bag that my dad used in the Rockies in the 1970’s. I consider myself pretty out-doorsy, but my gear needs a serious facelift.
Katie was just as surprised as I was to learn that Tami wasn’t an out-doorsy person. I think that we just both assumed that she was because, personality-wise, she fit the bill. Both Katie and I grew up going to summer camp: hiking, canoeing, cooking over fires, sleeping in tents and, of course, peeing in the woods. We both decided that we’d much rather take care of business in the bush than use a latrine but we forgot one important detail: above a certain altitude (about 3000 meters) there isn’t a bush because without enough oxygen, plants don’t grow! Some nights our campsite was remote enough that Katie and I would find a big boulder to go behind. Otherwise we were forced to use the lovely latrines provided by Tanzanian National Parks. The latrines were small wooden sheds, usually without a door, and, because they were built on the side of a mountain, uneven flooring. Latrines were clearly marked either “Porter Toilet” or “Tourist Toilet,” though I’m glad to report that segregation is dead on Kilimanjaro and Porters and Tourists felt free to use whichever toilet gave off the least amount of stink. Though the most challenging part of the latrines (better known to us as the “Shit Shacks”) were the small holes in the ground, obviously designed with the better aiming male anatomy in mind. So, combine the construction with the slanted floor, the high altitude with a lack of oxygen, multiple layers of clothing, suggested water intake of 4-5 liters per day, the small target and, of course, the sometimes beyond putrid smell and you’ve got jokes for the entire trip. So much for peeing in the bush! 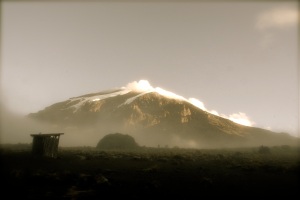 The PLEASE PISS NICELY shit shack
While all of the Shit Shacks are memorable, there were two in particular that the three of us will surely never forget. At Karanga Camp the floor of the Shack was so slanted and the target so small that there was, understandably, a yellow puddle in one corner. I was the first of the three to venture into that one and, while trying to get my footing, I noticed some pretty distinct graffiti on the wall: PLEASE PISS NICELY was written in black Sharpie right next to the yellow puddle. I don’t know if it was the situation or the oxygen depravation or the exhaustion or what, but this Sharpied request got me laughing so hard that I missed the target completely and doubled the size of the yellow puddle. The day had been wet and cold and our campsite was currently in a cloud so, shivering, I made my way back to the tent and told the other two to go use the Shit Shack. High altitude and lack of oxygen (blame it on the a-a-a-a-a-a-altitude!) made this whole scenario funnier to the three of us than it probably actually was, but memorable nonetheless. (Though, seriously, who goes to the trouble of writing graffiti in a a latrine on Mt. Kilimanjaro?)

Barafu Shit Shacks, and the edge of a windy cliff
The next night at Barafu Camp (Base Camp) the Shit Shacks presented a whole new challenge. At first we were excited – these actually had doors on them and seemed better constructed than the ones further down the mountain! But, as Katie soon discovered, looks aren’t everything. The Barafu Shit Shacks were built on the side of a very windy cliff and whoever designed these pristine mountain bathrooms did not take ventilation into account. Soon after arriving at camp Katie came out of the Shit Shack laughing. Basically, anything that you try to put down the hole blows right back up. I opened the door to one of the “toilets” and found dirty tissues sticking to the urine covered ground. Fantastic. There was literally a wind tunnel coming up through the small hole in the ground and creating a dirty tissue tornado. In order to discard of you tissue, you had to stick your arm down the hole and let go, otherwise it would blow back up at you, most likely hitting you in the face. Being the positive girls that we are, we took this as fresh comedic material and referenced the insanity of it for the remainder of the trip.

Katie models the Barafu Shit Shacks
Between the Shit Shacks, the cold/wet weather, the insanity of summit day and amazingness of the entire experience, Katie and I have decided that Tami has more than earned her out-doorsy badge. While Katie and I had years of past camping experience to fall back on, Tami basically jumped straight into the deep end of hard-coreness and, by God, she swam!