Skip to content
Sunday was a special day. The sun was shining (for an hour longer, too), the broom was sweeping (sun inspired spring cleaning) and the beans were boiling (more on this one later). All of this in preparation for a screening of the MTV documentary Summit on the Summit, a Kilimanjaro trek organized by musician, Kenna, to promote awareness of the global clean water crisis. Kenna, who was joined by Jessica Biel, Lupe Fiasco and other famous friends, is of Ethiopian decent, making the clean water crisis a personal one for him.
So, on one of the warmest days Chicago has seen so far in 2010, I invited Tami and Katie over to relive seven of the coldest days of our lives. The African themed dinner (recipe below) complete with Milo and vino was originally organized so that we could laugh at the celebs whining their ways up the mountain but, instead, we ended up feeling almost bonded to them. Regardless of our histories, experiences or bank accounts on the mountain we’re the same – we struggled over the same tough areas, breathed in the same thin air and had the same awe at the top. Suddenly, Jessica Biel and I have a lot more in common.

I think we look just as cute as the celebs while climbing!
The dramatic footage and retelling of summit day not only brought back nostalgic emotions of the experience but made the three of us seem even more amazing to our family and friends. To quote a text received from my mom Sunday night, “So glad i didn’t see this b4 u climbed kili – i’d be a mess! Way 2 go – all of u!!!”
But here’s the thing: the danger and risk of it all made me want to do it all over again. (Does that make me crazy?) I can honestly say, with 100% certainty, if I were given the opportunity to climb Kilimanjaro again tomorrow, I’d do it in a heartbeat! Because, despite the cold and headaches and the sore muscles, nothing compared with the feeling of making it to the top – that surge of adrenaline that hit me like a train, making me feel superhuman – capable of anything I set my mind to. Just writing me about it fills me with energy!
And another thing that fills me with energy… githeri! Githeri is actually a Kikuyu dish and a favorite of mine. I love any excuse to prepare Kenyan cuisine but this was my first stab at githeri. Now, get your pen and paper to write down the ingredients because there are many:
Red beans
Maize (or, in the US, frozen corn)
Seriously, that’s all. Quick soak the beans by boiling them for a few minutes and then allowing them to sit for 2-3 hours off the heat. Then drain, add the corn (equal parts). Cover and simmer with enough water to cover the mixture until most of the water is evaporated and the beans are tender. The frozen corn makes it a bit sweeter than it is in Kenya, but overall I was pleasantly surprised by the results. And the best part is that it keeps for several days in fridge, making fantastic leftovers! 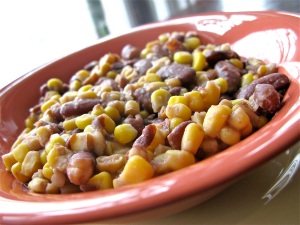 Githeri – a delicious and nutritious taste of Kenya!