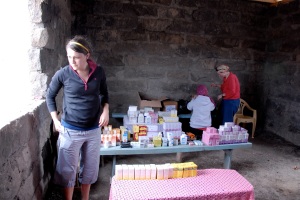 Setting up for the medical camp

Organizing a medical camp is something that we all wanted to do before we left, and I’m delighted to report that it happened – barely! It took a while to get the funds together and for a while it looked like it just wasn’t possible but the Irish saved the day! Volunteers from Dublin, Niamh, Amy and Helen, had met the Dust Babies a week earlier and sponsored the construction of 30 desks in the school house as well as a months worth of water in the water tanks and graciously offered to help sponsor the medical camp. So Irene and I threw it into high gear, traveling to Naivasha on a Thursday evening to petition a medical camp for the very next day. Fortunately the Minister of Health admired our ambition and helped us not only staff the camp but supplied immunizations, family planning materials, ARV’s and de-wormers.

A happy mother waits for her baby to be vaccinated
We all, including Katie who had flown in only hours earlier, left a rainy Nairobi early Friday morning and made our way to Mbaruku. Katie, Dre and I were dropped at the camp to play with the kids and check on the chicken project while Irene, Tami, Niamh, Amy and Helen continued on to Nakuru where they purchased the drugs and medical supplies wholesale. The drugs were then dropped back at the camp and we set things up while the van drove 30 minutes in the other direction to pick up the staff and equipment from Naivasha. Finally, around 3pm, the camp was open for business, and business it did get! A queue had been forming from around noon of Sunday-dressed dust mamas, bwanas and, of course, babies, all extremely grateful for the camp and taking full advantage of the free treatment.

Most Dust Babies were given large bags of nutritional
supplements to be mixed in with their food
Then something happened at Mbaruku that I had never seen before: it rained. And rained. And rained. Dust babies became mud babies, windblown tents became leaky tarps, pots and pans were put out to collect the water and there was an overall rejoicing and sense of relief from the adults. To Kenyans, rain equals life. Despite the fact that their tents can hardly stand and several will not survive another rainy season the end of the draught was happily met.

Families were given free prescriptions and preventative medicines
In the end, every resident of Mbaruku IDP camp was examined and treated, though the last several patients needed to be examined by lantern light. There were enough drugs and supplies left over for a second medical camp that was organized at a similar IDP camp the following week. It was a perfect end to my volunteer time in Kenya, sitting in the dark at Mbaruku, sipping hot chai with Irene and my fellow volunteers, knowing that having met the Dust Babies, none of us would ever be the same.