I really wish I had a photo of that one to share with all of you, but my camera was safely stowed overhead and I had an aisle seat.  It was beautiful and colorful and gave me renewed energy for the second leg of this journey.

The strange thing about international travel is that you never really know which day it is.  But my cleaver laptop is telling me that it is just after 7am on August 26, and I’ve decided to believe it.  After all, technology never lies.  I’ve prepaid 6 euro for 30 minutes of internet time at the airport here in Amsterdam, so I better use it wisely.  Yesterday (what still seems like today) and the days leading up to it were a whirlwind… moving out of my apartment, working two last minute jobs, and dealing with my maternal emotions in leaving Essie behind in Winnetka (albeit with a WONDERFUL family – shout out to the Matuskas!)  I’m not normally a crier, but I made an exception and the post-tears headache is a dull reminder of my out of character emotions.  Seriously, KLM had an airline promo that featured a woman playing with her dog on the beach and I almost lost it.  Posting a pic of my girl.  She’ll have to substitute for the missed sunrise shot. 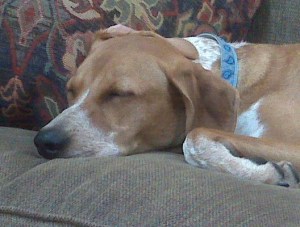 So, after months of planning and organizing, I’m off!  I don’t know if I will actually believe it until I see Irene waiting for me at the Nairobi airport this evening, but I’m slowly getting back into the Safari Jenn mode.  Early morning layovers at large, international airports seem to be a staple for my solo travels.  Lots of good people watching.

I was thinking about this trip compared to the last while I was on the plane, and I’ve come to the conclusion that it’s just different the second time.  The excitement and nervous energy are still there, but for completely different reasons.  This time around I’m excited to get back to my project, back to my babies, back to the unique African way of life.  I’m excited for my friends to join me in a few short weeks and to introduce them to the corner of the world that means so much to me.  I’m excited to us my donation money and to do things that I’ve been wanting to do for years.  I’m excited to be able to blog more often about what I’m doing to give a better picture to all of you back at home.  I’m excited that I’m fulfilling the promise I made to myself over two years ago – that Kenya isn’t a one time thing.
A couple of months back I bought the book “Dark Star Safari” by Paul Theroux and have been saving it to read on this safari.  In the opening chapter, he describes what, exactly, a safari is.  “The word ‘safari,’ in Swahili, means ‘journey’; it has nothing to do with animals.  Someone ‘on safari’ is just away and unobtainable and out of touch.”  For me, part of that is true – I’m certainly on a journey – but I am going to do my best to be somewhat in touch (though the lack of BlackBerry is already amazing)!
Next post from Kenya!